EDM involves passing a high frequency current from a shaped electrode or wire via a small spark gap to the tool steel blank which is immersed in a dielectric fluid. The process melts away small particles from the blank to reproduce the shape of the electrode as a finished cavity or hole. EDM is used where precise, complex holes or cavities must be made in a die. Because EDM involves intense local heating, the surface of the cavity is structurally changed to a
depth of up to 0.005” (0.13mm). Because this thin surface layer is untempered, it can cause premature failure where high impact or tensile stresses are encountered or under conditions of stress cycling. If such service conditions are anticipated, it is advisable to remove the layer by lapping or grinding. If this is not possible, the work piece should be re-tempered slightly below the original recommended tempering temperature.

The big and the small

Steel type as used in date coding of parts have typical relief of .020” to .030”. The EDM process changes the surface layer structure (.005” deep), causing a common weakened material state known as “decarb” which effects the life of the die by a minimum of 20% (see figure at left). The smaller the character the greater the effect.

The EDM process changes not only the surface of the work-metal, but also the subsurface. Three layers are created on top of the unaffected work-metal (see figure). The spattered EDM surface layer is created when the expelled molten metal and small amounts of electrode material form spheres and spatter the surface of the work-metal. This spattered material is easily removed. The next layer is the recast (white) layer. The action of EDMing has actually altered the work-metal’s metallurgical structure and characteristics in the recast layer. This layer is formed by the expelled molten metal solidifying in the crater. The molten metal is rapidly quenched by the dielectric. Microcracks can form in this very hard, brittle layer. If this layer is too thick or is not reduced or removed by polishing, the effects of this layer can cause premature failure of the part in some applications. The last layer is the heat affected zone or annealed layer, which has only been heated, not melted. The depth of the recast layer and the heat affected zone is determined by the heat sinking ability of the material and the power used for the cut. This altered metal zone influences the quality of the surface integrity. Automatic finishing circuits available on CNC machines greatly reduce the recast layer, but do not eliminate the heat affected zone.

Marc has been in the marking business for over 15 years. He provides technical assistance through emails and online chat.

What do you want to know? 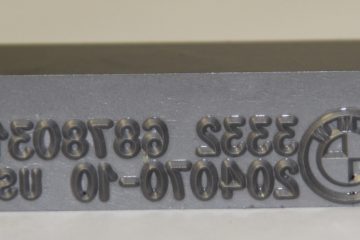 Options for in die marking include multi-character, multi-line, and logo solid dies.

Q: The standard length is 3/4″. What special length options are available? A: Up to 3″ long.

Q: What material are the CMM090 stamps made of and what hardness? Are there different materials available? A: Tool steel. Varies with availability – O-1 or W-1. The hardness is 58Rc. CMT offers custom materials Read more…